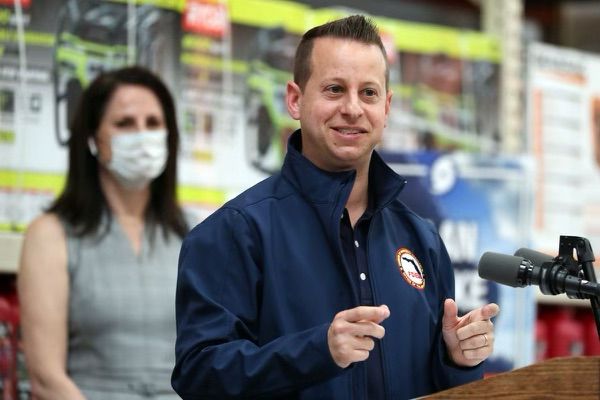 In his final days as director of Florida Division of Emergency Management, Jared Moskowitz speaks up

A young man in a perpetual hurry, Jared Moskowitz has been in public life for 15 years and he’s only 40. After earning his BA in political science at George Washington and his law degree from Nova Southeastern, he interned for Vice President Al Gore and served as an elector for President Barack Obama in 2008. A six-year tenure on the Parkland City Commission came next and then Moscowitz won his seat in Florida’s House of Representatives, which he held from 2012 to 2019. He resigned in order to be appointed to his Florida Division of Emergency Management role under Governor Ron DeSantis—an unlikely ally from across the political aisle. Soon after COVID-19 struck, the bold new DEM director took on 3M for rerouting N95 masks—masks that had been designated for Florida—to higher-paying foreign countries and once the vaccines became available, he bucked the CDC guidelines in order to prioritize seniors.

With just days left on the job (he leaves his state government post on April 30), Moskowitz is still very much in the thick of it. South Florida Business & Wealth caught up with him last week, on the day that the federal government paused the distribution of the Johnson & Johnson vaccine.

We’re catching you on a fraught day, with the J&J news.

That happened first thing this morning at 7 a.m., so we immediately had to find out all the places we have J&J and pull it from all the sites and mobile buses. Vaccination starts at 7 a.m. so that was a nice logistical mini-crisis but we were able to respond and pull it off.

Just another day at the office, right?

We’ve been activated at Level 1 for over 390 days, the longest activation in Florida state history. We wake up every morning, since the beginning of this, whether it was getting PPE or making sure that our hospitals didn’t become overwhelmed, and now onto the vaccination. We’ve been trying to save as many lives as possible, to mitigate the damage of COVID-19, then go to bed and wake up and do the whole thing all over again. Every day here is groundhog day.

What worries you most about the J&J vaccine being pulled?

My concern is that we’ve seen significant vaccine hesitancy in a bunch of different communities, specifically communities of color—they have preferred the Johnson & Johnson vaccine. So I’m concerned how this may add to an already difficult situation.

I have to tell you that everyone I know here who has gotten the shot experienced such efficiency and compassion.

I appreciate that. Obviously you wouldn’t hear that if you were picking up the newspaper that’s trying to stay out of bankruptcy [i.e. The Miami Herald]. We’re not perfect; everyone is doing this for the first time. All the experts who managed the Spanish Flu are no longer around. We feel that we’ve done a good job, in the state of Florida, if you compare us to Texas, New York, California—the other states our size. But there are no winners—we’ve had over 30,000 who have died. Those families are forever broken.

You made a controversial move in prioritizing seniors over essential workers. Tell me about that.

Seniors were 80 percent of the deaths in Florida. We were one of the first states to go to 65 and older. We did that against CDC guidance and Advisory Committee on Immunization Practices guidance. We were criticized for it, but again, we did it because the data showed that 80 percent of our deaths were 65 and older. The first thing you want to do is stop people from dying; you want to stop people from going into the hospital. You want to go to the highest risk category. And we have 4.3 million seniors in the state. For a time, we were number 1 in vaccinating seniors—we had vaccinated more seniors than any other state. Almost 80 percent of our seniors are now vaccinated and we got to that number faster than anybody else.

We did a lot of things that Israel did. We also instituted the Israeli strategy when it came to using extra doses. If we had extra doses, but were out of appointments, we vaccinated anybody who was willing to take the vaccine, regardless of age, to make sure we didn’t have wasted doses.