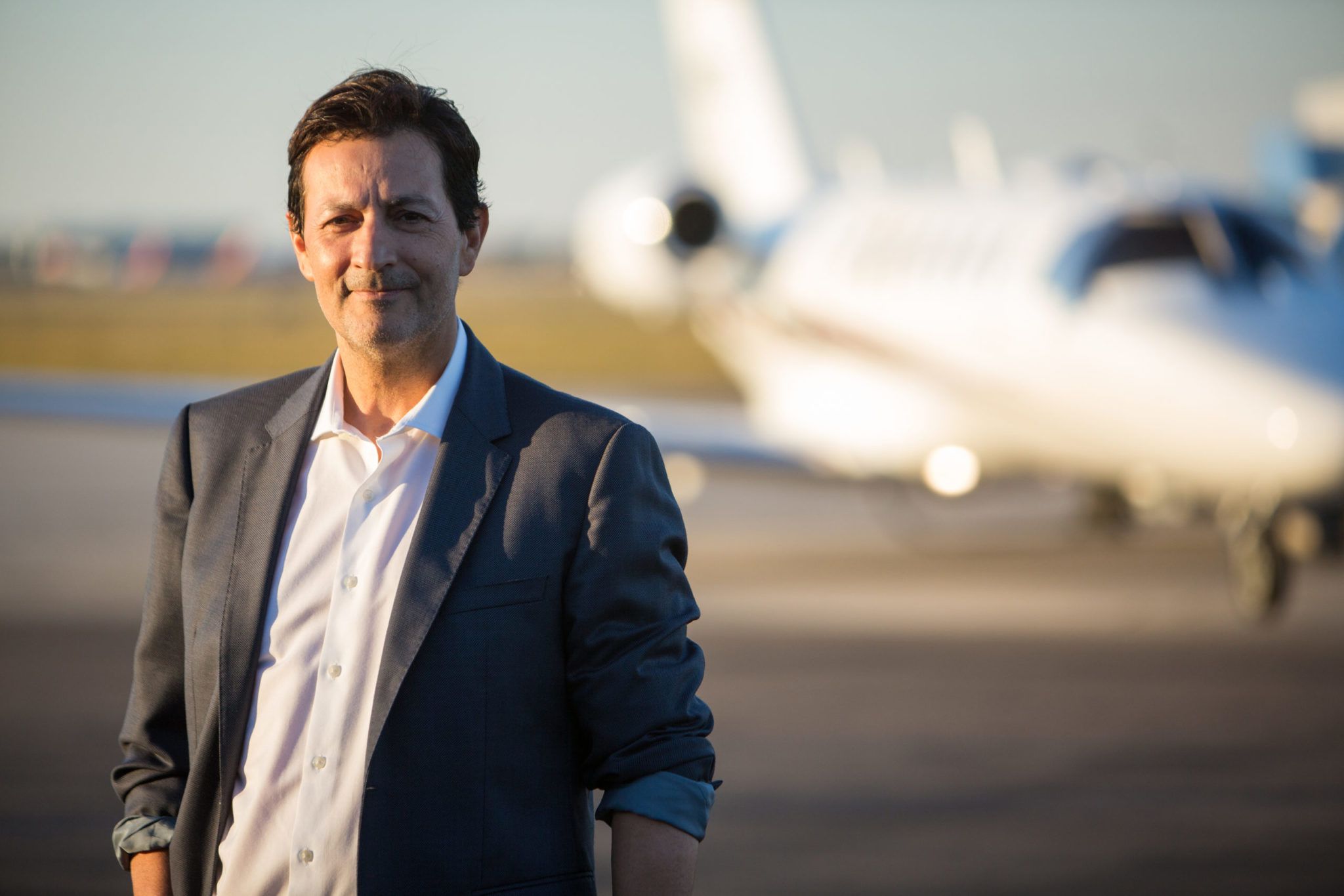 Hands on, up in the air and remaining grounded. Harry Hedaya does it all.

Harry Hedaya won’t invest in a company unless he has a role in the operations of it.

He’s learned the hard way, if he’s not involved it doesn’t work.

It’s not because he knows more than anyone else, but because he needs to be invested in a more profound way than signing a check.

He’s been down the road more than a few times and, in some cases, has learned this lesson the hard way.

Hedaya is a serial entrepreneur, based out of Tampa. He’s worked in industries like staffing, financial services, small business marketing and communications.

In his most recent role, he is chief information officer of Send It By Text, his third company, which helps businesses efficiently communicate with potential leads and clients.

His business ventures have a combined revenue of $40 million to $50 million per year.

He has no “rulebook” for being a successful entrepreneur. He describes it as a more organic evolution.

“Your personality traits need to be 100 percent okay with failure,” says Hedaya. “To be an entrepreneur, it’s not that hard. What’s hard is dealing with the door in your face and the idea that you thought was so amazing, everyone else thinks is garbage.  All the effort you put into that amazing website that no one goes to. It’s the rejection. If you can live through that, and you actually have something to offer the world that is of value, you’ll be a successful entrepreneur.”

Hedaya was born in Pakistan, in 1967, to a fairly politically involved family.

Hedaya’s father was educated at Cambridge, in England. When his dad moved back to Pakistan, he worked for Shell Oil Co. and had his two children, Hedaya and his sister.

Pakistan was a young country at the time. There was civil and political, unrest in the country, so Hedaya was whisked away to England to attend boarding school.

In 1983, Hedaya’s father was killed in an airplane bombing. Hedaya was 15 years old.

“I remember that day, really distinctly. Someone came to get me out of class,” Hedaya recalls. “It was shocking. Now I had to be raised by a single mom, who probably had never worked a day in her life. Somehow, she managed to get through those years. We always had a place to live, food to eat and I managed to stay in school.”

Hedaya moved to the United States in 1986, he selected Florida because he wanted to attend the University of Tampa with a mate of his from boarding school, in England.

“We just decided to apply to schools in Florida where the weather was nice. We pretty much threw a dart on a map,” he says, laughing.

After Hedaya graduated, with his degree in finance and accounting, his uncle recruited him out to Los Angeles to work at his firm, Beverly Hills Securities.

“I sold most of my possessions and put everything else I owned in my car. The biggest thing I owned was a TV, which if you remember in 1990 the TVs were huge. I packed all of this up in my two-door sports car and drove across the country,” he says.

After his uncle’s company closed, and he had worked in the business for several years, Hedaya established his own mortgage firm called Real Estate Mortgage Acceptance Company. He put $50,000 on his credit cards, and all the cash he had, into the business.

His first office was a small space above a Ruth’s Chris Steakhouse in Beverly Hills. “I wanted a Beverly Hills address,” he recalls. “At 5 p.m. every day, the smell of steak, that we couldn’t afford to eat, would permeate up through the floor.”

At its peak, the business employed more than 150 people and was one of the largest home improvement lenders in the country.

“I had about 150 employees. We were probably grossing $25 million a year in income. I couldn’t believe how easy it was. When you risk everything, and you really throw it all in, failure isn’t an option,” Hedaya says. “I learned very early on that I wanted to be the least relevant person in the business. I’m not an operations person. I’m not very detailed oriented. I’m a visionary.”

He continues. “The ability for someone to be successful is not so much about what they go to work and do every day, it’s about their ability to attract the right people and to hire, motivate, train and inspire those people to see the vision that you see.”

In 1999, “Everything went to hell in a handbasket,” he says. It was the dot.com bomb. Financing dried up. He, ultimately, was forced to shut the company down.

At the time, he had two small children and wanted the better quality of life and lower taxes that Florida provided.

He thought he might be a homebuilder in this next phase but quickly realized that wasn’t what he wanted to do. He did help build about 20 homes in South Tampa.

Hedaya wanted to get back into the mortgage business, it was in his blood at this point, so he established a company called Loan Corp. His timing was spot on.

“People were starting to do a lot of refinancing and interest rates were coming down. I repeated the whole process I had successfully done in California,” he says.

At one point, he says, he was the largest independent mortgage broker in Florida doing more than 1,500 transactions a month. Then, again, it was time for another economic event. The Great Recession of 2008.

“That’s when I realized you can’t really build a business on a foundation of quicksand,” he says.

There’s a pattern of problem-solving in Hedaya’s most successful ventures. A formula, if you will. Find a problem and solve it. Easier said than done, but Hedaya tends to get it right.

“When the mortgage industry died, there were a lot of problems with people being able to get financing and people not being able to pay their bills or their credit cards. There was an opportunity born out of that, which was to help people deal with their debts.

Hedaya then entered the debt consolidation business with Reduce My Debts, a partner with Amber and Ryan Duncan, who were the subject of TBBW’s September cover story.

Hedaya also helped to invest in a business venture idea of his and his ex-wife’s called Broadstaff.

“I couldn’t really bring a whole lot to that company,” he says. “She’s really the one behind that [company’s] success.”

Hedaya remarried, after a divorce from his first wife, and had another child about three years ago.

“I think the older you get, as a parent, the more you really appreciate your kids,” he says.

Hedaya also has two older children from his first marriage.

“I have one in law school at Stetson and my daughter is going into biotech, she’s really brilliant,” he says.

When asked about how he enjoys success, he doesn’t have a lot to say. He drives a used Toyota Tacoma truck, doesn’t fancy designer clothes or collect art.

Hedaya credits his humble nature to his mother, who he describes as being very grounded.

When asked about is philanthropic endeavors, he says he doesn’t like to talk about it. What he does is very personal to him.

“I had a really good friend from Israel and her son died. There’s a synagogue in Hyde Park and the reason it’s renamed for her son is because I support that setting. Now, you may wonder why a guy from Pakistan supports a synagogue, but it has nothing to do with that,” he says. “It’s because the rabbi there is a really humble person and is really doing some good things in the community to help the homeless and help so people can eat and shelter themselves.”

He directs his charitable donations to humble places where people are doing real work that is making a difference.

“My life changed overnight. A lot of uncertainty came when my dad blew up in a plane one day and we didn’t know where our next meal was coming from,” Hedaya says. “I’ve always been very cognizant of that level of strife in the world.”

Hedaya’s wife, Bunny Hedaya, is on the board of Babycycle, an organization that helps mothers obtain diapers and other necessities for their children.

When she isn’t flexing her philanthropic muscles, she’s also a famous social media personality on Instagram and Tik Tok. TheBunnyBarbie is quite a hoot to follow.

One thing the Hedaya family is indulging in is their new home in Wyoming. They are currently building a second home in an exclusive, aeronautical neighborhood that they requested not be disclosed.

In the irony of all ironies, considering his past – another passion of Hedaya’s is aviation. He operates his own private Cessna Citation CJ3 plane and has been flying for more than 25 years. It’s the freedom that has always lured him, particularly during these lockdown times.  Hedaya and his family can travel, free of worry, to any destination they choose, he lights up when talks about him and Bunny piloting their own destiny.

The day of the interview he had flown in from Ohio, after having a nice meal there. Because of this passion of his, he also helps to fund aviation scholarships for children who are interested in getting into the aviation field.

When COVID is over, Hedaya says one of his bucket list items is to see more of the world he has yet to explore.

ANOTHER CALAMITY, ANOTHER OPPORTUNITY

Hedaya has been through his fair share of watching economic ups and downs.

“In every calamity there is opportunity. If I hadn’t gone through [economic collapses] two times, COVID would have scared me a little more,” Hedaya says. “In March, when we shut down, everyone was scared. We didn’t know what was going to happen. It was frightening,” Hedaya says. “What happens for all businesses if everyone stops paying everyone and the entire economy collapses?”

These cycles don’t deter him anymore. He’s been through it, got the T-shirt and knows what to expect next.

“The bottom line is there’s going to be economic calamity about every 10 years. Just deal with it,” he says. “Successful people have a habit of being successful, no matter what. It always comes back and it will again.”

As we wrap up the interview, Hedaya says he wants to share something we didn’t ask about but he thinks is important.

“What a great opportunity this country is. If you think about it, in 1990 I graduated with a piece of paper and a 2.0 GPA. Where else in the world can you achieve such heights of success with that kind of track record?” he says. “What drew me to America is that anything is possible here,” he says. ♦