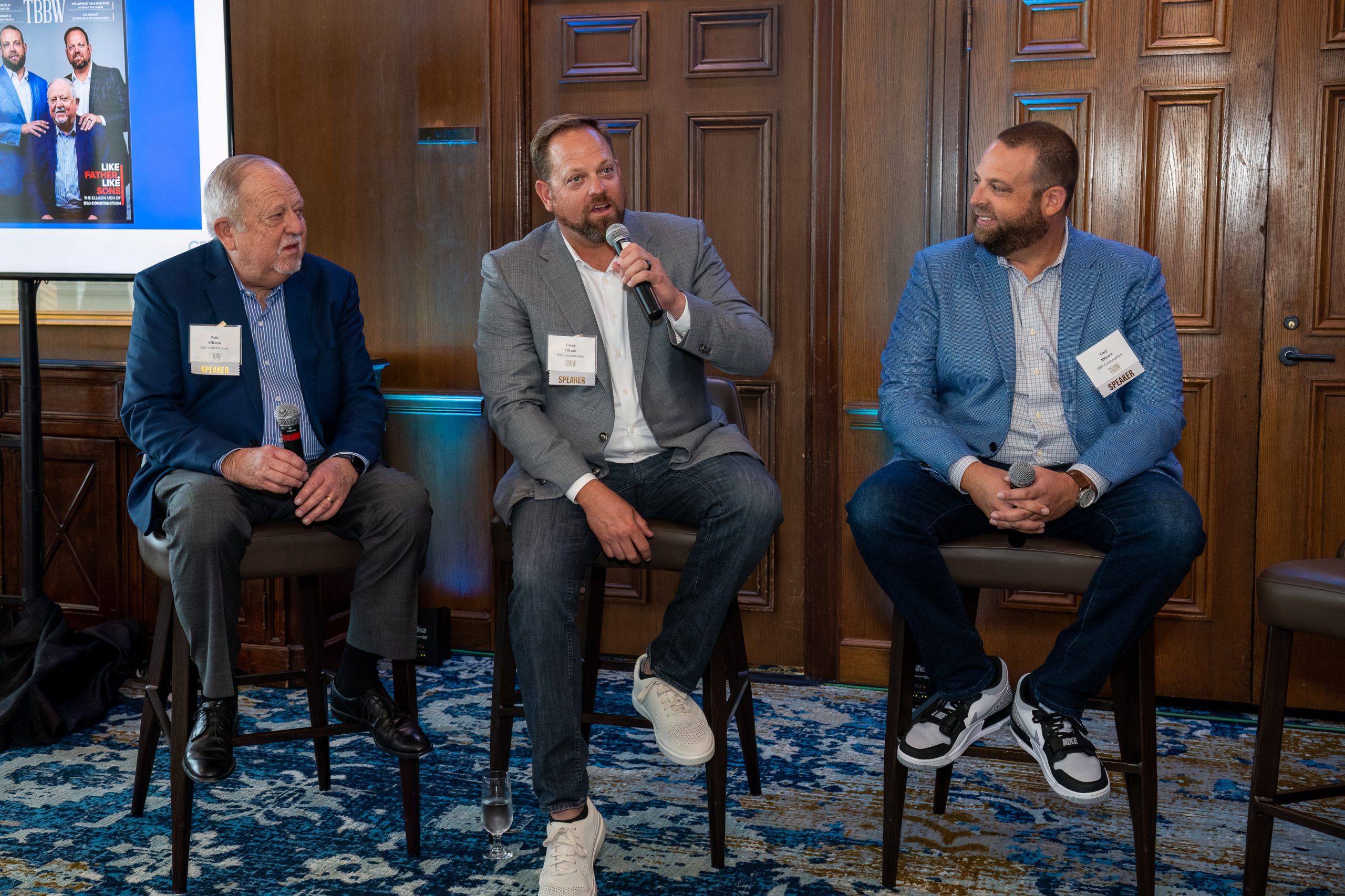 CEO Connect with the Ellison men of EWI Construction (PHOTOS)

Sam Ellison is the patriarch of the Ellison family and chairman of EWI construction. His eldest son, Casey Ellison, is the chief executive officer of EWI. He established the company in 2007. And brother, Cory, is the chief operating officer of the company.

They have worked on major Tampa projects like the Oxford Exchange, Armature Works and the Stovall House, just to name a few. It’s safe to say the father and sons have a winning business model.

They have projected revenue of $110 million in 2022. And they have their first major project in downtown St. Petersburg, coming out of the ground, which is a 23-story residential tower called the Nolan.

Bridgette Bello, CEO and publisher of Tampa Bay Business and Wealth, interviewed the Ellison family in front of a live, sold-out audience at the University Club, in Tampa. This interview has been edited for length and brevity.

Sam: I’ve had several calls from Hollywood. Seriously, it has been great. I’ve received a lot of wonderful emails and calls. It’s been an honor to be on the cover.

Casey and Corey, is there anything you’d like to add?

Casey: I would say if you were considering advertising in this magazine, you should. Because we’ve had a lot of different accolades in our career. And I have received more comments, and more attention, from this cover than anything we’ve  ever done. I know it’s not because of the nice sport coat I had on, so it has to be the circulation of the magazine.

You’ve got some big news to share as it relates to the future of EWI and a big transaction that you guys closed on this month after the cover came out.

Casey: On June 6, we completed a minority recapitalization of the company. We sold 49% of EWI Construction to a local family office capital group called Ayon Capital, which is a big deal for us. It puts our balance sheet in place with anybody in the market, probably anybody in the country. It also opens a lot of avenues, from a development perspective. We’re excited about what that’s going to do for our business, going forward.

Every business venture comes with failure. And you’ve had some great successes but tell us about some of your failures, and how you failed forward so that people in this room can learn from you.

Casey: It’s a very interesting question. When young entrepreneurs come to me and ask me about starting a business, I express to them that you’re going to get knocked on your face a bunch. And it’s about how you get up that makes the difference, right?

Well, none of us believe that. When I decided I wanted to start my own company, in my mind, I was gaining freedom away from “the man.” He was no longer gonna be able to stand over me and tell me what I can and can’t do. The company was going to have no titles, no policies and no human resources. And the exact opposite is actually true.

Instead of going into actual failures, because there are a bunch of them, I think I was at the University of Tampa listening to a CEO speak two years after I started the business. And she said to always lead from the position of righteousness. And what that meant, to me, and what she was saying is, no matter how hard it gets, don’t put yourself in compromising positions where you’re not in the catbird seat. And if you do that, you can work out most problems.

Partners in the community will always help you, as long as you’re leading from a point of righteousness. Stay true to your core and don’t compromise. It will work out as long as you show up, put your boots on and figure it out.

Cory: To add to what Casey is saying, we’re a unique business, right? A lot of people lose business, or something goes wrong in their business, they lose widgets, they don’t actually lose tangible dollars. Our business is unique in that if we make a mistake, or if something happens, it’s real money. The bills must get paid. Like Casey was saying, we learned that sometimes when you do have failures, the solution isn’t the best thing for the business from a bottom-line standpoint, but it is the right thing to do.

We’ve learned that sometimes the bottom line isn’t everything, sometimes you have to take a hit. People will respect you for that, later down the road.

Sam: In this business, I’ve had many, many failures, but fortunately, more successes than failures. I think the biggest failures that I’ve ever had, is recruiting, and hiring people that I knew down deep, I shouldn’t.

You guys are in a noisy space with no shortage of big behemoth competitors that are nationwide companies and yet you have some of the sexiest projects in town. During your interview, we talked about what you’ve done to set yourselves apart from the competition, but we didn’t get to talk a lot about it in the story. I would like for each of you to talk about it here because it was moving.

Cory: We have been very fortunate to do some marquee projects in the market. I think the reason why we’ve had success and why we continue to get these types of projects, and it’s apropos that Baker Barrios is one of the sponsors tonight. The majority of the time the end user is our client and we try to protect the design. It’s very important to us, because at the end of the day, the project, when it’s done, is a billboard for us and what we do.

Budget matters, it’s probably the most important thing when it comes to a project. But if you go through, and you value engineering, and you strip everything that’s cool out, you end up with just the same thing that everybody else does. I think where we bring a value to add.

I think that’s why we’ve been able to do these projects that are so popular, and so unique, is because we protect that design. We believe in authenticity,

If you can’t afford to put that product in your building, don’t put a fake version of it in. Because whether people realize it or not, it’s going to cheapen the product. It’s all about being authentic and protecting the design.

Sam, you look like you have something to add.

Sam: I think another thing that differentiates us from our competition, is that the people that own this company, we’re part of this community. We have to look you in the eye. We have to do an excellent job. They’re held accountable by all of you.

All of us are dealing with supply chain issues, rising costs and talent shortages, all at the same time. How are handling those issues?

Cory: This is unprecedented from a supply chain problem, right? I tried to get some dry cleaning done on Saturday, I found out all dry-cleaning plants are now shut down on Saturdays. As far as managing it, from our perspective, we have an analyst that monitors the commodities markets.

As far as talent goes, I don’t we have a problem. Luckily, we’ve been here a long time. We know a lot of the guys in the market. I think we managed the talent portion pretty well.

When was a moment you wanted to quit?

Sam: I think the moment I wanted to quit was when early in my career, when they told me they were going to send me to a little town called Johnson City, Tennessee, to build a product. I had no desire to go up there. But I did learn a lot from it and was a big point in my career.

Casey: Early on, in EWI, when the financial crisis hit, we had two storage facilities and a retail project that the site work was complete. I think foundations were started. And we got a call on Friday from all three banks that told us don’t show up on Monday because funding was gone.

That was way worse than what we’re looking at right now. Never in my life could I have imagined that, and these were big banks. So, you can imagine what that was like. That was pretty low. It was early and I didn’t know how I was going to navigate it. But here we are.

Cory: Mine is probably not as profound as Casey’s. But early on in EWI, I was the superintendent on everything we built. And it was my first project. I’m a young kid out of college but feeling myself a little too much. We were building a single-family residence at the time. And Casey committed to having this house ready a few weeks earlier than what we had talked about for a New Year’s Eve party. And I was literally sweeping out the bar and game room area, as guests are coming in. And I’m thinking, what am I doing? Like, I went to college, what am I doing this for? But I will say that about 20 minutes later, he walked through the door and grabbed the broom and helped me sweep out the house. I think that was probably the brief moment I was like, maybe this is not for me. ♦

The evening begins with a cocktail reception for about 120 guests, followed by an interview with that month’s cover CEO.