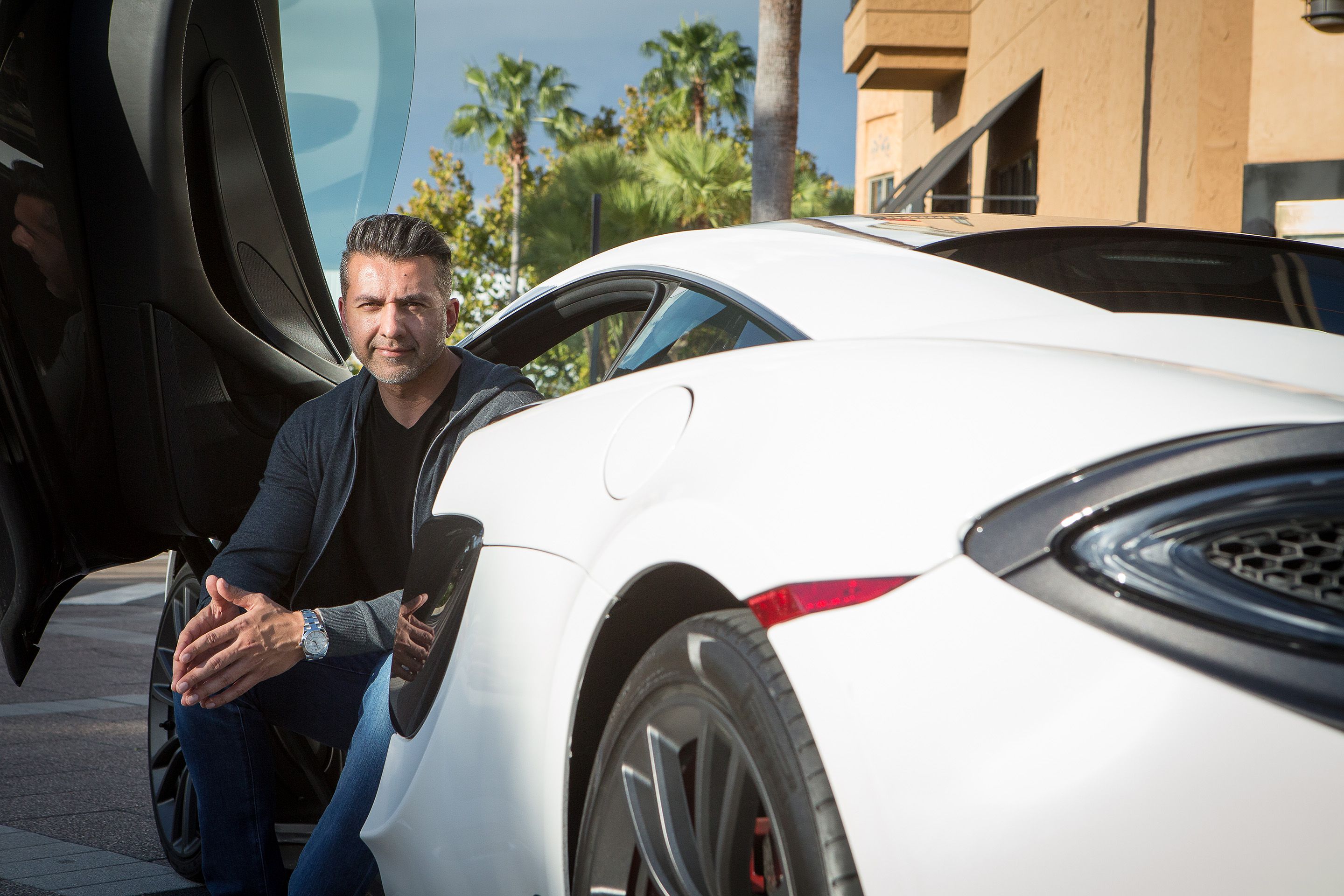 Vick Tipnes is Driven By Success and Freedom

The CEO of Blackstone Medical Services talks about his lowest point, and how he and his company bounced back

Vick Tipnes is driven by success, but to him, success means nothing if you don’t have freedom.

“There are people that have a lot of money, but they’re not successful because they do not have freedom. There’s no success in being chained to a business or a career that you don’t love and have purpose in.”

At a young age, Tipnes had ambition, but no solid idea on what he was working toward.

“I never knew how or what I would do specifically, but I always carried myself in a way that I knew I would make it eventually. I knew I would never give up, even if you cut off both of my arms and legs,” he says.

Blackstone Medical Services, Tipnes’ national medical device company headquartered in Tampa, has made the Inc. 5000 list two years in a row, ranked 1,750 out of 5,000 companies, based on growth of 355 percent in three years, and has now become one of the largest providers of home sleep testing in the country.

With plans to grow through acquisition and new product lines, Tipnes says Blackstone will be valued well over the $100 million mark by 2024.

An ambitious goal for a businessman who was down to $78 in the bank not too many years ago.

Blackstone Medical Services was a happy accident for Tipnes.

In 2010, Tipnes was introduced to sleep testing devices by a friend. “I thought it was interesting and I thought it was something I could build a business around,” he says.

Tipnes began sketching out what he envisioned: a multistate business for providing sleep testing solutions in the home.

“I felt with my ability to sell and my knowledge in health care [Tipnes’ first business was a radiation practice], that I could provide better solution focused on better quality, access and costs for patients, physicians and insurance companies,” he says.

Tipnes established Blackstone Medical Services in his kitchen in 2012.

He reached out to a large health insurance company, which became his first client. The contract was a three-county deal, including Hillsborough, Pinellas and Pasco. Tipnes had to prove that the model would be beneficial to the client and doctors.

Tipnes then needed to raise money to expand his business and to service his new contract, to the tune of about $250,000. After finding an investor, who Tipnes declined to name, Blackstone moved into a small office space in South Tampa for about $500 a month. “The office was so horrible, but it was all I could afford,” he says. “I remember people would come to interview and would see the office from outside and drive away.”

Nevertheless, he signed a year lease. “I’m a big believer in bending the physical universe to what you want, and not adapting to it. It’s like, ‘OK, now I’m going to raise the money’ because that’s how you manifest it. It’s creating a high necessity level. I’ll do it and then figure out a way to make it work,” Tipnes says. “I had the three-county deal with one insurance company and at the same time trying to obtain more. I’m out knocking on doors [to find new clients] … it was really scary, and sometimes I would ask the office next door to me to send us a fax, because no one was sending us business.”

At the end of 2013, Tipnes and Blackstone hit a critical period.

“I got a phone call one Tuesday afternoon in early February, 2013, while I was on the way to pick up my boys from school. The investor was pulling out and we were out of money. I think we had $2,500 in the bank account,” he says. “I had to borrow money that week to make payroll or I was out of business.”

The timing couldn’t have been worse.

Tipnes was going through a divorce and had moved into a three-bedroom apartment, as he had his two sons, Rohan and Rian, 50 percent of the time.

“I had a mattress on the floor in my bedroom. I had no nightstands, I had one lamp and I had no furniture except a couch and bunk beds for the kids. When I got divorced, I literally left everything,” he says.

Tipnes says he had $78 in his bank account at that time, and as a reminder, he took a screen shot of his bank balance on his cell phone, which he still has in his photo library.

“It was a pivotal moment in my life because it was at that moment that I decided I was going to make this right,” Tipnes says. “I saw this mountain of opposition against me and I’m like, ‘[Expletive] it. What do I have to lose at this point?’ I’m not a doctor. I’m not an attorney. I don’t have a trade or degree. I have a GED, so what am I going to do? All I have are my guts and my brain.”

Tipnes made a deal with his investor to get back his stock so he could go out and raise more capital.

In 2015, Blackstone began to pick up momentum again. The company’s original contract deal grew from a three-county deal, to a 15-county deal, then 50 counties, and then nationwide, while more national deals started to solidify.

Tipnes attributes the company’s rapid growth to great timing, a great product and a great team.

“There is something to be said about having the right idea, at the right time, in the right market,” Tipnes says. “It’s not because I’m some brilliant guy.”

A “wow” moment happened for Tipnes a few weeks before his interview with TBBW. In late 2018, Tipnes moved Blackstone Medical Services into a 9,000 square foot office at 550 N. Reo St., in Tampa.

“All of a sudden, it hits me. All of these people have families, they have homes and cars, and it’s a sense of responsibility … where we came from, and where we are now. It’s no longer only about me succeeding, it’s about all the people who rely on me.”

Tipnes was born in Leicester, England, in 1976. Both of his parents were entrepreneurs. His father was in the textile industry.

Tipnes’ father bought a 25-unit motel, and the family lived in the onsite apartment. Tipnes was the youngest of three brothers—a self-described black sheep of the family.

“My dad was very frugal, so he figured out how to do everything himself and then taught us how to do it,” Tipnes says. “It was a very unorthodox upbringing, because we didn’t have family vacations, because someone always had to be at the business. It was kind of one of those experiences that really helped shape the life I wanted to lead, because I missed that we never really went anywhere together as a family.”

Tipnes’ parents moved to Tampa before he did, as he decided to drop out of community college and learn how to sell cars.

Tipnes’ parents health began to fail in 1997, so he moved to Tampa to be closer to them.

His first business venture was a radiology practice established in 2002. He later sold it to a private equity firm for $9 million, but walked away with only about $250,000. “I made every mistake you could possibly imagine. I took on too much debt, gave up too much equity and sold it at the wrong time,” he says. “I found myself at a crossroads. I was 31, and I thought my life was over, based on what I originally envisioned.”

He contemplated joining corporate America, but he didn’t think it would be a good fit for him.

He says he never really had a mentor, and instead, turned to books. Some of those books were Think and Grow Rich by self-help author Napoleon Hill, and Dianetics and The Problems of Work by L. Ron Hubbard, the founder of Scientology.

When asked how he indulges in his financial success, Tipnes was stumped until asked about his car, a McLaren, which naturally draws attention. (He’s also obsessed with Nike Jordan sneakers, which he wears every day.)

“I got a McLaren because I really wanted it,” Tipnes says. “I thought it was fuel for me, because it makes me feel like I have to step up to the plate.”

This plays into his goal-setting strategy. Determine what you want, go after it, and then rise to the occasion to maintain it.

“Deion Sanders used to walk around with $5,000 cash in his pocket [when he was a student at Florida State University]. And, when asked, ‘Why do you do that?’ he would say, ‘I want to feel rich.’ ”

Tipnes recalls a conversation with friend Eric Miller, who is a financial adviser. “He said, if you need an apartment and found one for $1,000 and there’s another one for $800, go for the $1,000 apartment. Aim higher and then produce more, and never shrink your space … always expand,” he says.

His McLaren essentially is a product of that philosophy. “I really, really, really wanted that car,” he says, as he laughs. “I’m almost tricking myself into being more successful. It was a [expletive] car, but you know what I did the next day after I bought it? I picked it up on a Friday night, and the next morning at 6:30 a.m., I woke up and felt I needed to now work even harder, so I went to work in my McLaren.”

Tipnes, partnered with his friend Tony Miller, former partner in Spark, a full service ad agency based in Tampa, to start www.HealthcareU.online. The online video training company is used by companies to train their sales people or by individuals seeking to break into health care sales.

In addition, Tipnes has evolved into a social media influencer. He has more than 50,000 followers between his Instagram and Facebook pages. He says it is his calling, and he speaks to groups regularly, and has his first book coming out soon.

“I didn’t think there was enough positive content on social media that actually helps individuals that are trying to better their life,” he says. “I was almost bankrupt, and I decided that if I got through this, I would put out content that will help somebody else. People need to know that they can turn their life around, no matter the situation, if [they] really want to. It’s very focused content created for people that are trying to change their condition in life and are motivated to do so.”

Tipnes says his rapidly growing social media presence doesn’t produce any profits. His reward is when he gets a message that one of posts has helped someone.

“You never know when one piece of content can change the direction of someone’s life. I’ve gotten a message from someone who was in their garage and was going to end his life by carbon monoxide poisoning, and watched a video and then changed his mind, and then sent me a message thanking me,” he says. “For me, there’s no greater effect you can have on someone, than positively changing their life or viewpoint. That’s the legacy I want to have.” ♦