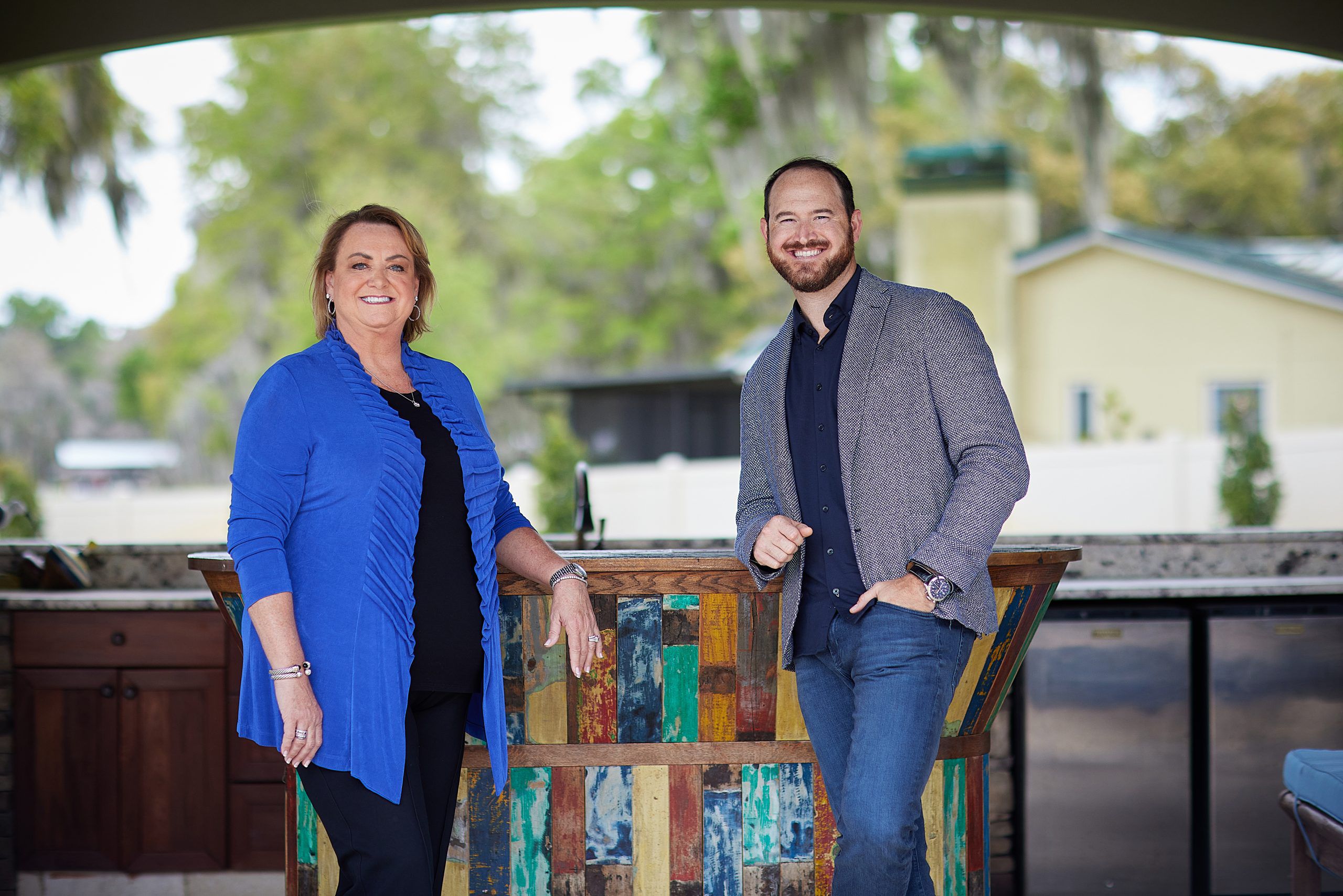 As Bay Food Brokerage grows, the CEO is preparing to take a step back

Bull-headed determination is not an overstatement when retelling Cammie Chatterton’s story.

She established her own company, Bay Food Brokerage, based in Tampa, in 1993 in a male-dominated industry. The company has since grown to 43 employees and had revenue of $9.1 million in 2021, with projected revenue of $10 million to $11 million in 2022.

As Cammie prepares to take a (small) step back from her chief executive officer duties, the next generation, her only son, Chris Chatterton, is prepared to step into the main leadership role of the business.

This comes after two hard years for their industry, with the COVID-19 pandemic and supply-chain issues greatly impacting the business. But both say it’s turning a corner and the future is bright for Bay Food Brokerage.

In 2019, it would have been hard for anyone to predict what the food industry was preparing to experience. And it kept coming.

First, a pandemic that brought the world to a halt, creating a supply and demand issue, and then a slow rebound that resulted in a supply-chain issue.

It was a few of the hardest years in the business, says Cammie.

“I’ve never been prouder of being in this industry,” she says. “When the world shut down, it was like you didn’t have to go buy that new car, but you did have to eat. And if you tell people that you’re running out of food, you’re talking about mass hysteria on a level that we’ve never seen in our lives in this country.”

Once the shelves were stocked and life began to look more pre-2020, inflation and a thinning workforce created a perfect storm of shortages and rising prices.

With trucking, it comes down to labor, Cammie says.

“I believe we are down about 335,000 truck drivers from two years ago, in the last three months we brought back 80,000. But there are still those people that are probably not coming back to the jobs,” she says.

Without truckers, manufacturers are having a hard time transferring goods to retailers.

“I’m optimistic that it’s going to get better. But there are so many constraints on manufacturers today with costs and now you’ve got gas going up, right? Now for trucking, those costs also go up,” Chris says.

Like any ecosystem, it works flawlessly when every stage is functioning properly. But one stage gets disrupted and the whole process gets broken down.

Bay Food Brokerage’s role in this ecosystem is playing the “middleman” for the food manufacturer and the retailer.

“We do the manufacturer sales for the retailers’ corporate buying offices. We have a team of sales merchandisers at the store level who make sure that the product is placed on the shelves accurately, and is merchandised properly,” Cammie explains.

She continues, “You figure we have 200 manufacturers, they’re all paying us and that pays for our team, so each manufacturer doesn’t need to have their own, whole, team.”

And Cammie was one of the, if not the, first women to establish this type of business, in a male-dominated industry. She established the company with a partner, who was not from the sales side of the industry, but she later bought him out of the company, when he was ready to retire.

“At 28 years old, I started putting the plans together to open a food brokerage. I turned in my notice not long after I turned 29 and, literally, left my job with no hopes of making an income and opened up a food brokerage with $5,000 that I had to borrow from my mom and dad,” she recalls.

The first few years were tough. She wasn’t making much income, if any, from the business so she also worked the counter at Service Merchandise. She was a young mother but, thankfully, had the support of her husband, Jim, and her parents who moved down from her native West Virginia when she had her son, Chris.

“They put their businesses and their home, everything, up for sale and moved here to take care of [Chris],” Cammie says. It should be noted that her husband also worked as a restaurant manager six days a week.

“I used to joke that I was always [my dad’s] sunshine until Chris came along,” Cammie says, with a laugh.

Chris has fond memories of being so close to his grandparents.

“It’s like I had two sets of parents,” Chris says. “My mom and my dad both worked like crazy when I was a little kid.”

Having two hard working parents and the love and supervision of two grandparents resulted in the man he is today, he says.

It began to pay off after about five years.

“I think that, in my mind, that fifth-year point was pivotal, like, ‘OK, I’m making enough money now where, actually, I’m not worried about paying the mortgage … and I can do this,’ ” she says. “Things were starting to turn around a little bit for women. We were starting to be taken more seriously in a very male-dominated industry. It all started to come together.”

And come together it has. One only has to look around at the beautiful surroundings of the Chatterton estate to know they no longer worry about the ability to make the mortgage payment.

“I get asked a lot in interviews, ‘Did you ever feel like giving up?’ And honest to God, no. Because I’m so bullheaded and God knows that’s where [Chris] got it,” Cammie says. “There was no way I was going to let anybody prove that I couldn’t do it.”

A proud graduate of Jesuit High School, the University of Pennsylvania and the Wharton Business School, Chris did, in fact, get some of his mother’s tenacity.

While mom and dad did work a lot when he was young, Chris recalls his mother always being present for the important moments.

“My mom was always the team mom, I was in every sport known to man,” Chris says. “No matter what, she was always a team mom. She wanted to support me on that, which I always thought was really cool. Because I knew how busy she was.”

While in school, during summers, Chris began to learn the business. Doing different roles, eventually preparing for the day when he would join the company, officially, if he could.

He did have to go through the interview process, just like everyone else. Cammie made sure of it.

“At the end of the day, it’s running a business,” Chris says.

Turns out, bringing Chris on brought new opportunities to the business.

“They were stuck, from a revenue standpoint. Their client list, it was almost a stalemate. You’re either going to grow and adapt, or you’re going to die,” Chris says.

It was 2015 and Bay Food Brokerage made the plunge and invested back into the business in a way it hadn’t done before. The three- to four-year exercise paid large dividends to the company.

“We’re not even fully reaping those rewards yet,” Chris says. “COVID really put a damper on that because there weren’t big conferences and we couldn’t showcase what makes us different, and now, as you know, the supply chain isn’t great.”

These days, Chris is preparing to take over the business. He currently owns 40 percent and earns more stock each year.

Cammie says she’s preparing to “retire” in December of 2025. She wants to be a consultant for the company and do the “fun stuff,” she says.

But she’s not quite ready to step away, she’s working to be sure she leaves her business, her team and her son, ready.

Being sure her team is taken care of, is always, top priority for Cammie.

“I wouldn’t be the person I am today without them,” she says.

There’s a solid team culture at play at Bay Food Brokerage. From hosting Christmas parties at the home designed for entertaining, owned by Cammie and Jim, to volunteering together on the regular, especially their efforts to fight hunger with Feeding Tampa Bay.

“You have to eat,” Cammie says. “We have a goal of having a hunger-free Tampa Bay [area] by 2025. We’re trying to double the size of the building so that we can feed more than twice the number of families that we serve today.”

Chris adds, “I don’t think people understand how much Feeding Tampa Bay gives back to different charities around Tampa.”

Metropolitan Ministries, and most all food banks in Tampa Bay receive food from Feeding Tampa Bay. At Metropolitan, the cafeteria feeds not only the people living there but the community in need that doesn’t live at their campus.

In addition, Chris is passionate about giving back to his high school alma mater, via endowments going toward scholarships. Donations also go toward campus improvements at the school.

“I want every young man to be able to experience the brotherhood of Jesuit. Through their endowment, Jesuit provides many opportunities to kids that would otherwise not have the opportunity to go to school there. Jesuits motto, ‘men for others,’ is so important to me and I strive to live my life that way,” Chris says.

And Chris will have another role he needs to prepare for in the coming years, master griller for the Tampa Pig Jig, an annual event that raises money for NephCure Kidney International, the only nonprofit organization committed to supporting research, improving treatment and finding a cure for kidney diseases.

Jim usually has five smokers going at the same time, just to prepare for the event, says Cammie.

“Chris is going to have to learn how to barbeque,” she says with a laugh.

While Cammie eyes that 2025 retirement date, she has plenty of work cut out for her. But the trailblazer that she is doesn’t appear spooked one bit. She manages it all with grit and a huge heart.

“If you own a company, and you have employees, I don’t care if it’s one employee or 20 employees, you better to go to bed every night with the concern that you’re taking care of those people,” she says. “You’re responsible for those employees and their families. And if you don’t feel like that when you lay down at night, that you’re personally responsible for them, you shouldn’t be the owner of a company.” ♦